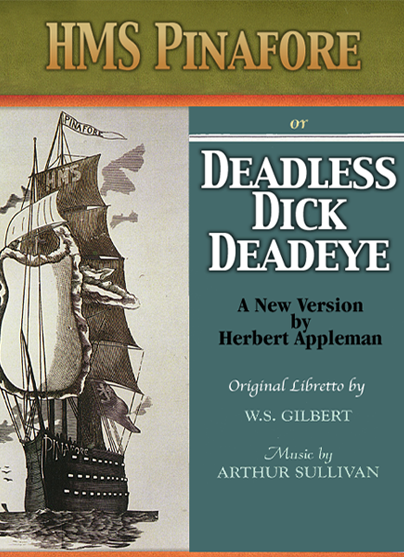 A New Version of
HMS Pinafore

A revision of the Gilbert & Sullivan classic, by Herbert Appleman, which restores the Victorian context and thereby enables a modern audience to understand the targets of G&S satire.

Dauntless Dick Deadeye, Herbert Appleman’s new version of Gilbert & Sullivan’s HMS Pinafore, which earned rave reviews from the London critics when it played at The Open Air Theatre in Regent’s Park this summer, has been nominated for an Olivier Award in the category, Outstanding Musical Production. The only other musical nominated in this category is the revival of Guys & Dolls.

The Olivier Awards, which are the London equivalent of the Tony Awards, will be presented in the grand ballroom of the London Hilton on Sunday evening, February 26th.

HMS Pinafore is of course an acknowledged classic. Why, then, do a new version? “Because,” explained Ian Talbot, artistic director of the Open Air Theatre, “Deadeye sketches in the Victorian context in a very clever way, and when the audience knows that context and can identify the targets of G & S satire, the play becomes much funnier.

“In the original Pinafore, Dick Deadeye is a minor character who’s considered a villain because he dares tell the truth and expose the euphemisms that run all through the play and, indeed, all through Victorian life. In Appleman’s version, Deadeye’s role is greatly enlarged and he becomes the central character.

“Over the years,” added Talbot, “I’ve been offered a number of updated versions of Pinafore, but they were stunts of one kind or another, and I turned them down. Appleman’s version is different; not only is his conception very clever, but his new dialogue and lyrics blend seamlessly with Gilbert’s — no mean feat when you consider that he’s re-written 70% of the original libretto! The end result is that Deadeye actually enhances Pinafore.”

The London critics agreed. Robert Hewison in the Sunday Times gave the production 4 stars and commended Ian Talbot for choosing “Herbert Appleman’s version rather than the Savoy Opera original.” Rebecca Tyrrel in the Sunday Telegraph had a “deliriously happy” evening on board the HMS Pinafore, thanks to the “wonderfully entertaining version by Herbert Appleman.” Mark Shenton in Stage Online also expressed thanks for “A libretto that has been extensively revised by Herbert Appleman” and thereby “rescues a show that has become mired in tradition and (gives) it a fresh and refreshing lick of energy.” And Michael Billington in the Guardian said simply, Pinafore/Deadeye “achieves that touch of ecstasy that is the sina qua non of all good musicals.”

Although Herbert Appleman has never been nominated for an Olivier Award before, he has won numerous other awards. His comedy, A Perfect Gentleman, won the American Playwrights Theater Award; his musical, Heyday, for which he wrote the book, lyrics, and music, won the American Musical Theater Festival Award; his television play, A Different Drummer, won the Cowan Award, and his documentary, “…And Suddenly You’re Alone”, won an Emmy Award.

Gilbert and Sullivan are so deeply stained into the fabric of Britain’s heritage that you will know the tunes and work out the ending without having seen this 1878 naval satire before. Which is why the director, Ian Talbot, was right to choose Herbert Appleman’s version rather than the Savoy Opera original. As an American, Appleman sees the humour in a class-ridden English navy overtaken by political correctness enforced by a desk-bound bureaucrat: Desmond Barrit, looking like a cross between George III and Edward Heath. The inflation of Gary Wilmot’s part as able seaman Dick Deadeye into that of hostile commentator on the action brings out Gilbert’s satire on long-lost operetta conventions, beautifully guyed in Sullivan’s music. Encouraged to view Victorian values through the lens of postmodern irony, we are set free to enjoy the evening for what it is: a glorious romp involving jolly jack tars and bouncing soubrettes, with Scarlett Strallen giving her all as the Captain’s daughter, and Simon Thomas as a sweet tenor who luckily discovers he was born above his boat station after all.
— RH

“In these grim times, a brisk ride aboard the tune-stuffed HMS Pinafore is just the thing to lift sagging spirits. Ian Talbot’s irresistibly jaunty new production, boasting more Union Jacks and patriotic sentiment per square metre than VE Day, is quite the jolliest show around … Like the song says, ‘Give three loud cheers and one cheer more’ for this heartening fillip.”
— FIONA MOUNTFORD, EVENING STANDARD

“The most blissful evening of tuneful and nautical joy to reach London since the National’s … revival of Anything Goes. A ‘new version’ of Gilbert & Sullivan’s greatest hit … (with) an enlarged starring role for musical veteran Gary Wilmot as raconteur seaman Dick Deadeye … An evening’s entertainment of vintage quality.”
— JOHN THAXTER, BRITISH THEATRE GUIDE

“Gunn (from Treasure Island) would have been deliriously happy on the HMS Pinafore … A wonderfully entertaining version by Herbert Appleman.”
— REBECCA TYRREL, SUNDAY TELEGRAPH

“Thanks to a libretto that has been extensively revised by Herbert Appleman … (this production of Pinafore) rescues a show that has become mired in tradition and (gives) it a fresh and refreshing lick of energy … A delightful evening.”
— MARK SHENTON, STAGE ONLINE

“Achieves that touch of ecstasy that is the sina qua non of all good musicals.”
— MICHAEL BILLINGTON, GUARDIAN

“It is hard to resist such a well-sung and vivaciously delivered staging … A treat.”
— SARAH HEMMING, FINANCIAL TIMES

“Ian Talbot’s … production works by having its tongue placed firmly inside its rouged cheek … The new libretto, updated by Herbert Appleman to wake up Gilbert’s satire, helps as well … An intoxicating production (that) provides badly needed escapism in this hideous political climate … The whole audience is flushed with … infectious joie de vivre.”
— RACHEL HALLIBURTON, TIME OUT