“NOW THAT TED IS GONE” 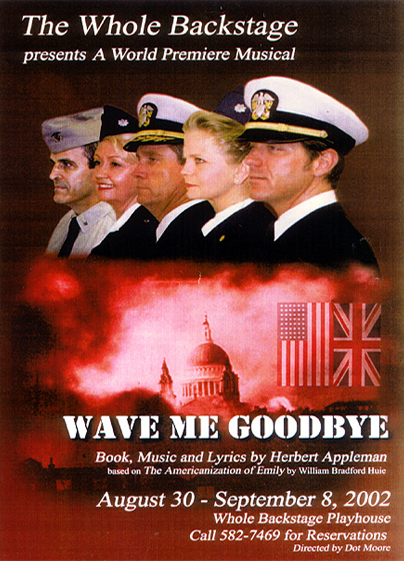 Wave Me Goodbye is a musical play with book, lyrics and music by Herbert Appleman, based on the World War II novel, The Americanization of Emily, by William Bradford Huie.

Set in England during May-June 1944, Wave Me Goodbye is about an American naval officer, Lt. Commander Jim Madison, and a young English widow, Emily Barham, who meet and fall in love shortly before D-Day.

*****
“The Whole Backstage shone as bright as a star falling on Alabama with the world premiere of Wave Me Goodbye.”
— Wayne Greenshaw, Advertiser-Glen, Guntersville, AL

*****
Unlike the movie version, written by Paddy Chayefsky, which superimposed the Vietnam War on Emily and created an anti-war polemic that was false to the experience of most American fighting men in World War II, Wave Me Goodbye is historically accurate and does justice to those men.